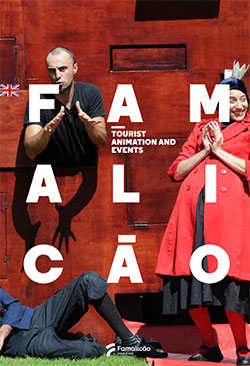 Vila Nova de Famalicão features a set of remarkable events and cultural infrastructures, stepping up to the cultural city title, largely recognized. There are several reasons to make a visit worthy at any time of the year, with the certainty that you will find here multiple interesting initiatives that will get you completely delighted. There are several events that take place throughout the year: exhibitions, concerts, shows, cinema, music, theatre, dance, conferences, among many others that creates a complete, diversified and unmissable structured cultural calendar every month.
Among the events we stress the Carnival, a spontaneous celebration, which takes place in the streets of the city, and it attracts thousands of people to such revelry and relaxing atmosphere. The regional gastronomy takes to the stage in the Dias à Mesa Programme. Within its multiple formats, we are invited to taste the traditional flavours with quality and refinement.
The Christmas, a time of magic, dreams and affections expression, is celebrated with great liveliness in the city.
The entertainment activities and the traditional retailing in the city centre mix many generations all together, from different places, in a joyful living.
There are also popular festivities, in the city centre and respective parishes, that represent a part of the city’s cultural identity. Many of these festivities are living traditions, but above all renewed ones. They are a great way of getting to know the locals, their habits and their traditions. The Festas Antoninas (Saint Anthony
Festivities), in June, are the highlight of the popular festivities. It is a strong cultural heritage, from the tradition to the contemporaneity, inviting you to share in a relaxed and spontaneous environment.

Carnival in Famalicão is a national reference. we use to say that it is the most expected night of the year. The party happens in the streets, in a contagious atmosphere, full of joy.

Takes place throughout the year, on specific dates. it is an invitation to taste the good regional cuisine, in a perfect harmony with the finest wines.

Happens in the beginning of May, in a tribute to the arrival of spring time and the splendour of this season, and is an event that recreates two secular traditions of this territory: The Flower Festival and the Trades Fair.

Takes place during a whole week, culminating in the night of june 12 with the popular marches and in the
june 13, the day of saint anthony. Being one of the most famous traditions of Vila Nova de Famalicão, the ‘Festas Antoninas’ brings together thousands of people in the city through various motivations, whether religious, cultural, or simply for leisure.

Handcraft Fair takes place every year by the end of august. The unquestionable value of the handcrafts, as well as the valorisation of the gastronomy as a touristic product, these are features that make people from all over the country respond to their curiosity and come to the fair for around 30 years, moved by the will to witness the way many products are handmade, and the will to taste the most genuine local flavours.

This trade fair goes back to 1205 and played a very important role in the
development of the territory since the beginning, as a trade area, recreating some of the biggest traditions of the territory, with its origins in farming.
Nowadays, the ‘Feira Grande’, as it is commonly known, happens by the end of September.

From the beginning of december to the three wise man day (in the beginning of january) there is lots of entertainment and magic in the
streets of the city centre.The christmas, closing the year, represents an important mark in the events calendar, and turns famalicão into a highly appealing
destination.